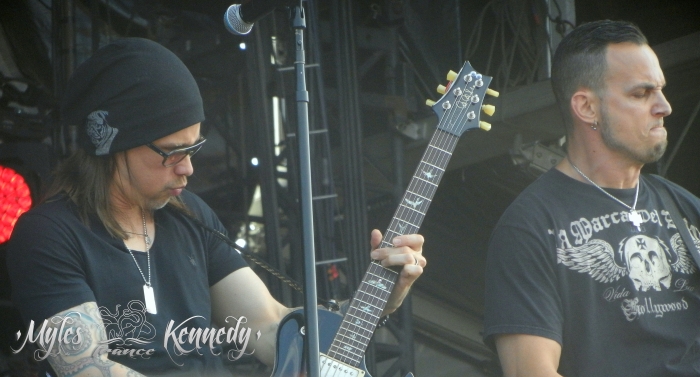 Here we are. Today is the day : June 22nd. 4years & 2 days after seeing Myles Kennedy on stage for the first time ever. First date in France since their last show @ Paris, October 2013. And they’re back for Hellfest, one of the biggest metal festival. 730km from home but it was worth every minutes spent on the train! After sleeping a few hours only, we’re back on the road to « Clisson » where the festival stands. It’s pretty early on the afternoon, but we want to get the first row! And we got it! Thanks to people leaving as soon as they don’t like the next band playing. 2pm, we’ve got to patiently wait for Alter Bridge until 5pm. It’s getting more & more exciting as time passes, and as we see Ian Keith & Ernie Hudson (guitars tech for Myles Kennedy, Brian Marshall & Mark Tremonti) getting on stage. It’s getting closer! The show starts with Addicted to Pain. The crowd is getting crazy, we’re all so happy to see the band again. They’ve got to be known in France, and we love that ! The setlist isn’t really special but they’ve found how to make it special. They all look so happy to play with their french fans again. Big moment for all the Mark Tremonti fans : Waters Rising. Best memory of the show. Firemen went to throw water at us, for sure water was rising !! Weather was so hot, it was cool to get a little shower. And Myles got fun by seeing our wet faces at the front row! The show goes on, and ends 50 minutes later. Followed a signing session we sadly got to miss … We already can’t wait to see Myles again in France next November with Slash !